What is Really Hurting America’s Malls

Over the past few years, you may have read that America’s malls are dying.

Many in the industry talk about these “shifting consumer demands” without exploring how and why those demands are shifting in the first place. I believe the real significant underlying challenge facing retail today is the shrinking purchasing power of the middle class.

The middle of nowhere 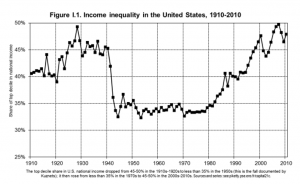 In his 2013 book, Capital in the Twenty-First Century, French economist Thomas Piketty uses IRS data to track the share of overall income declared by the top 10% of American taxpayers from 1910-2010. A century ago, income inequality was steep—with the top decile claiming as much as 45-50% of the nation’s taxable income. After a stock market crash, The Great Depression and World War II, that number eventually stabilized for much of the mid-20th century—with 90% of Americans declaring 67% of the total declared income.

These 90% of American taxpayers represented the primary source of consumption during the economic boom of the 50’s, 60’s and 70’s until the election of President Reagan in 1980, and the implementation of the supply side economic theory by the Republican party. The imbalance once again skyrocketed in the following decades, eventually topping 1928 levels, and rising even further today. When 90% of the population claims about 50% of the total declared income, a ~25% loss in income over time (67% to 50%) it directly impacts the retail expenditures those households would have made. While the top 10% increased their available income by more than 50% in the past four decades, it had almost no positive impact on the sales of (non-luxury) retailers.

The retail paradigm shift
While the above graph clearly illustrates the trend, such a large-scale shift was not immediately obvious. Developers were still building, even against a backdrop of declining demand, causing malls to become overbuilt. This period of shrinking demand corresponded to the creation of power retailers, outlet centers and warehouse clubs. The consumer was primarily shrinking its discretionary spending, which disproportionately affected regional malls and the corresponding retailers. With department stores closing, and no middle class to buy goods, it’s only natural that the industry is witnessing itself shrink.

Survival of those who can change
In Columbus, where Steiner + Associates is headquartered, the disappearance of the middle class is strikingly apparent. Where in the 1980’s it used to take three malls to cater to the demands of the middle class in a market with a population of 1,500,000, there now seems to only be enough expenditure potential for two malls to exist with a population of 2,500,000. The COVID-19 pandemic has only sped up this inevitability.

While brick-and-mortar malls and retailers are decreasing in number, it doesn’t mean they will disappear completely. Those who survive the onslaught need to (or have already) reinvent themselves to be relevant for the future. We are now catering to an increasingly hollow middle class and an emerging generation focused on sustainability, experience, ease, efficiency and local-first shopping.

The American middle class won’t stop shrinking unless a more distributive economic system replaces the present approach, as it happened after the second World War. In the meantime, to stay alive and successfully reinvent themselves for the future, malls need to first understand the reasons behind the changes they need to make—lest they disappear along with their consumer base.